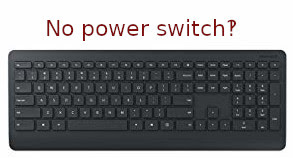 Say whatever else you want about them, Microsoft has always made amazing peripherals hardware. I got their Microsoft Wireless Desktop 900 keyboard/mouse set, which is much the same as the Wireless Keyboard 850 in a kb/mouse bundle. It's no exception - reasonable price, great quality, does exactly what it says with no nonsense and stray LEDs. The keyboard is really flat and convenient.

Unfortunately they took the minimalism a bit too far. The keyboard has no power switch.

The keyboard goes into deep sleep when no keys are pressed for a while, which is nice enough if it's left sitting on a desktop - but pretty hopeless for a travel keyboard. It lives in my backpack and half the time it comes out flat because a key has been left pressed.

I recently got around to addressing this unfortunate limitation, which brings me to the following less than beautiful but highly effective hardware hack: 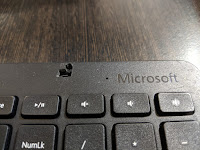 I didn't exactly nail the switch placement, but it works wonders. The switch is nearly flush to the case so it doesn't tend to get operated accidentally, and since I added it I've had exactly zero battery-dead incidents.

Adding it was simple enough.

You'll need a small switch that you can fit into the case. Any little switch will do, but I suggest something low that can be kept pretty flush to the casing but not so fiddly you can't easily operate it without tools. (So avoid DIP switches unless you have micro fingers). I used the switch depicted here. Similar switches are very widely available. It's more convenient to use a SPST switch so you only have two terminals to worry about, but this was what I had to hand already. 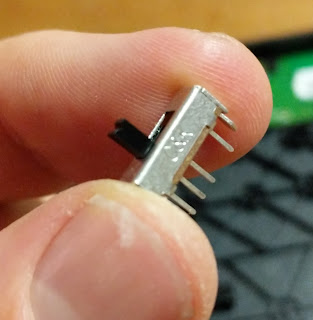 You also need a small amount of fine insulated electrical wire. Any electronics store has it in abundance. I used very thin (don't remember gauge) solid core copper wire with red insulation, but really pretty much anything that's not too thick will work here.

This is a soldering job, so you need to be able to solder or willing to try it out. If you've never soldered anything before you can still do this as it's a very easy job, but I still suggest trying a few practise wires and pins and so on first. Please use lead-free solder and work in an outdoor or well ventilated environment, rosin fumes aren't something you want to have regular or intense exposure to. If you don't have any gear, all you need is a basic soldering iron (though a temp controlled one is much nicer) and maybe a 10cm length of electrical solder wire.

I made a list of extra tools at the end of the post. They're all really handy to have and make these sorts of tasks much easier. But none of them are necessary for this simple job.

If you know what you're doing already, you don't need this guide. But all I did was took a small switch and found a spot it'd fit inside the case on the top edge above the keypad area near the LED guide. I extended the existing +ve wire that goes from the battery to the keyboard circuit board to reach the switch location. I made another wire to go from the circuit board +ve terminal to the switch. Then I soldered the wires onto the two switch terminals, cut a small hole in the casing to allow access to the switch, and closed it all up.

(Ignore the hole I put in the bottom in the following pics. I originally wanted to have the switch sticking downward into the well of one of the feet of the keyboard but I couldn't make it fit there).


There you go. No more flat batteries.

Wouldn't it be nice if they'd just included a switch in this otherwise excellent keyboard to start with?

You don't need any of these. But I used all of them in this job, so I figured I'd list what I find to be useful.