My Xerox Phaser 5500N has been failing to print with phantom "Jam in Area A" errors for the last few days. No paper is actually jammed in the printer, it just reports a jam after printing the first page. When viewing the jam log or the web interface, the jam code was "E3-6", which is documented in the manual only as "fuser area". 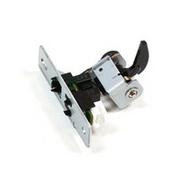 It turns out that the Xerox 5500 has a common failure point - arguably a design flaw - in the fuser exit switch.

Xerox support wanted $210 to come and look at the printer, wouldn't guarantee to even bring appropriate parts, and said it'd cost another $210 plus parts if they had to come back with parts to repair it. They wouldn't talk about the jam code or do any phone support of any kind at all. Payment for the site visit was to be made up front before they'd even book a tech, and they wouldn't give me an ETA before I paid. They don't sell parts, and won't provide service manuals. This made me very, very angry.

Instead of paying Xerox over $400, I paid the supermarket up the road $3 for some super-glue. After removing the fuser I could see that the fuser exit switch lever had broken, so I just glued it back on and got the printer working again. Depending on the nature of the fault, you might not even need the glue.

First, watch this video to see whether the assembly is just gunked up. Check if the lever has snapped while you're at it.

The fuser exit switch is a simple opto-mechanical sensor. It trips whenever paper leaving the fuser pushes a lever that moves to obstruct an optical sensor. If the switch isn't tripped at the appropriate point in the print process, the printer assumes the paper jammed in the fuser and reports "Jam in area A" with code "E3-6". If the printer stays tripped even when no paper is moving through the machine, the printer reports "Fuser Error" and refuses to print. 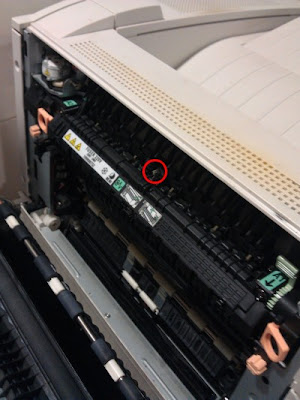 Above: Exit sensor location, behind the fuser. Remove the fuser to access it.

Unfortunately, the fuser exit switch is a little plastic part that sits behind and above the fuser, where it heats up and cools down very frequently. After a while it becomes brittle and prone to breaking. It's also in the path of unfused toner, and tends to clog up after a while, becoming stiff and tending to stick.

To access the sensor, turn the printer off and remove the fuser using the two orange screws and the two orange pull handles. Place it somewhere it won't burn anything and won't get dirty. In the top middle of the exposed area you'll see the exit sensor assembly.

You can pull the plug out from the left side of it then unscrew it with counter-clockwise turns using a regular Phillips screwdriver. Once you've got it out, have a look at it - make sure the spring is unbroken and in place, the little curved lever is unbroken, and that it flips up and down smoothly.

Alternately, you might just be able to clean and lubricate it if it's sticking. See the video above. 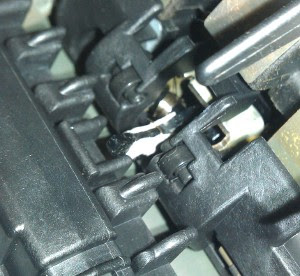 If your actuator lever is broken, superglue should hold it together. I glued mine back together with paper strips on each side of it to reinforce the brittle, heat-damaged plastic and it seems to be working OK. For some reason I didn't have any luck with two-part resin epoxy glue - it remained very fragile and broke at the lightest touch even after hours of drying time - but superglue worked fine. It's not pretty, but it's not $400 either

Finally, there might be an issue with the spring. Without a reference part it's hard to advise on this; I had trouble figuring out how to get the spring back in the right position and kind of bodged it into place. Comments from anyone with a clue would be recommended here, but you can always buy a replacement for the assembly if you can't figure it out and fix it.

Don't give Xerox your money as a reward for their bad design, bad service and bad attitude by paying their crazy service rates!